A few months back, one of our monthly newsletters had an article that discussed the oral health risks of smokeless tobacco. And one of our patients wrote me asking, “What about vapors? Any studies?”

Well, (and yes, I actually do read what you send me) there are. More every day it seems.

Clinically, I can state that there are not only visible changes that occur when the oral tissues are exposed to the smoke from tobacco but that it also influences the reparative capacity of those tissues, especially in response to inflammation or injury. A recent University of Rochester Medical Center study suggested that e-cigarettes were equally damaging to gums and teeth as conventional cigarettes.

Aside from articles in Dental journals and publications, a quick search on the internet revealed that the popularity of e-cigarettes is growing and discussions about safety, age appropriateness, addictive behavior and health risks are coming from a broad range of sources. A “sub-culture”, apart from those traditional smokers using this nicotine-delivery system to help “kick their habit”, has embraced the e-cigarette as an alternative to tobacco, as a means of social inclusion and/or rebellion. There are contradictory reports as to the efficacy of e-cigarettes in a smoking cessation program and some studies show that their use may actually decrease the chance of success (a 2016 meta-analysis; The Lancet Respiratory Medicine).

According to an article in the Journal of Adolescent Health, “growth of ENDS (electronic nicotine delivery systems) usage has been particularly rapid in the adolescent population, surpassing that of conventional cigarettes in 2014”. In April 2015, the CDC released a report finding that use tripled over the past year among middle and high school students.

The Surgeon General’s office recently launched a website aimed at educating parents and those who are influential with our youth. It is informative and useful. Please visit e-cigarettes.surgeongeneral.gov.

Safety concerns have been growing. Aside from the highly addictive properties of Nicotine, many studies have found that ultrafine particles in the vapor may include small amounts of toxicants, carcinogens, and heavy metals. The use of e-cigarettes during pregnancy has been questioned.

Another concern is the possibility of the device exploding due to malfunction. Severe disfigurement and trauma has occurred as a result. An internet search will quickly yield reports of many unfortunate cases. 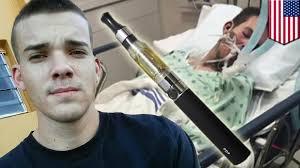 There is so much more information available about this social phenomena and I hope that you explore, become more informed and bring your thoughts for discussion.